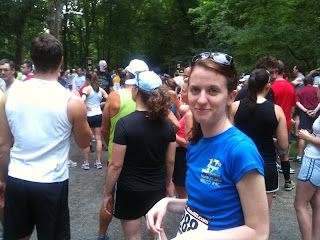 I finished (emphasis on finished) my second 10k trail race of the season this past Saturday in beautiful Wissahickon park. But it was by far my toughest run for several reasons: despite a good night's sleep, I was exhausted after a jam-packed workweek, my regular practice runs had subsequently taken a backseat to work, it was hot on race day, and there were inclines on the course I hadn't really trained for. All of these factors led to a less-than-desirable (ok, outright shi**y) situation: I almost passed out in the woods.

When I started feeling sick, desiring an IV or someone to whisk me to the finish line where I would have appeared to have beaten Ed, I was nowhere near a road. I was, in fact, half-way up a steep hill, which probably made matters worse. The only thing I could do was walk it out...walk towards help. My head was pounding and I was nauseous. Any minute now, I thought, I'll blackout. I wasn't too worried. There were plenty of runners around if I absolutely needed assistance and I knew I'd see a volunteer soon. I remember thinking that the feeling would eventually subside. But all I wanted to do was be done with the race and I was only about half-way through at this point.
I started putting out vibes to the Universe. "Please let me reach someone who can help me" and "Please let me get out of here as quickly as possible."

While I had pictured the help being a person with a walkie talkie, I soon met a fellow racer who had also taken a break from running the trail; we walked 1/4 mile together, commiserating about the heat, the course, and how baffled we were to be experiencing trouble after having finished the Broad Street Run just a month ago.
Surprisingly, I started to feel better after this talk. We both began a light jog and a 1/2 mile later I was running full-steam ahead. I couldn't believe that the pain/nausea has ceased and that I had any energy left. I had never run faster in the final stretch towards the finish line. Thank you, Universe!
In the end, I completed the trail with a time of 1:21. At the start of the race I had hoped for a time of 1:07 (the time of my last 10k trail run) but all things considered, to have just finished this race was an accomplishment. And I fared much better than the guy last year, who needed to go to the ER and get paddles to jumpstart his heart because he didn't hydrate during the race.

Ed ran fabulously on race day, finishing with a time of 52:35 and placing 72nd out of 449 runners. Congrats, Ed!
Next up: a military-style 10k, complete with mud and obstacle courses. Things are going to get dirty.
Posted by Jen at 3:22 PM

Email ThisBlogThis!Share to TwitterShare to FacebookShare to Pinterest
Labels: running

I don't say this lightly...this was by far the most difficult race I've ever done. I was going strong on the flat portions, and I was booking down the inclines in the trail (and actually rolled my ankle in doing so), but I had no choice but to walk up most of the steep inclines. They were brutal. I was also unprepared for the many inclines we would face on the trail, but I'm proud of my time, and uber proud of Jen for her inspirational run. It's amazing how far she's come in less than five months.