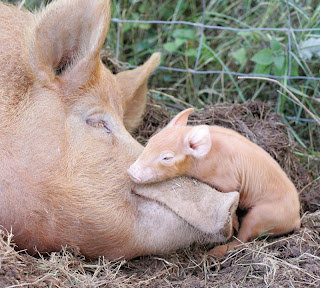 "The greatness of a nation and its moral progress can be judged by the way its animals are treated."

This past weekend I watched Earthlings, a film documenting the ways we use animals for profit and consumption. The video, which is available for free on this website, is raw and chilling and violent. It was difficult to watch but I feel that every adult should view this for health, consumer, and ethical reasons.

While some people will feel that this movie's agenda is to convert meat-eaters to vegetarians and vegans, I feel that its purpose was to raise the following question: do we have the right to mistreat animals? Although there are many examples of animal cruelty today in the names of research, entertainment (think bull fights and dog fights), and beauty (cosmetic testing and fur "harvesting"), factory farming has received much of the attention lately...because of it's health effect on us. (egg recalls, beef recalls, etc). 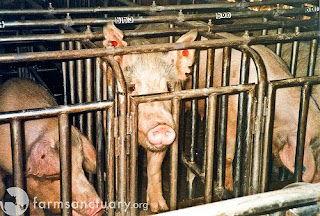 Sure, this is an important issue for us. I originally gave up animal flesh for health reasons...to lower my cholesterol... and to avoid tainted products (you want a side of hormones and antibiotics with your BLT?). But when I learned about what actually goes on in these secluded and extremely guarded factory farms, I wondered what they were hiding. Why couldn't the factories be made of glass, if not for commercial transparency, to let some light in on the animals? Why couldn't we visit these "farms" the way people visit other food-making establishments (like Hershey's Chocolate or Herr's Potato Chips or the local farm close to where I grew up)? If we are willing to eat animals, why can't we see what goes on there? Because if we did (in the current conditions), we'd likely never eat their "product" again.

Now I'm not going to get all don't-eat-meat on you. I respect the fact that food choices are deeply personal and cultural and that many people eat meat. I do hope to generate interest in questioning the current meat-producing system and the effect it has not only on people's health but also on that of the animal. I believe the two are inextricably linked.

If animals are to be eaten, shouldn't they be treated respectfully? Would anyone want to eat something that has been stressed out during its life and who suffered needlessly during its death? It would be lovely if baby pigs could nestle with their mother or if chickens could run in a field and see the sun. But in the current "food" system very few animals see daylight and they are restricted in their movement, sometimes lying or standing in their own waste. Undercover footage has revealed workers kicking animals, bludgeoning them, cursing at them, burning and skinning them alive...and for what?

Since watching Earthlings, I have wondered how I would go about getting meat if I was not a vegetarian. Ideally, I'd reduce the amount to consume and find a local farm where animals see sunlight, are given their natural right to mother their babies, and not be pumped with drugs and hormones. This sounds very happy-go-lucky but if an animal was going to become a part of me (as all food I take in does) I'd want it to have lived a happy and healthy life. Is that so much to ask?

If you have seen the segment of Earthlings that shows the hellish conditions of factory farms, you'll appreciate the following clip from Polyface Farms even more. Wouldn't it be great if we could abolish factory "farms" and have respectful and trustworthy farmers like this? 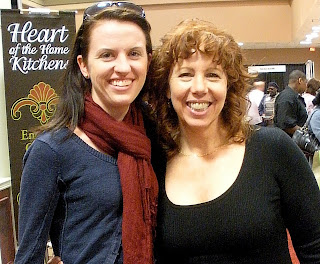 Maybe he thought I was judging him. Maybe he was disgruntled that I was asking him to tweak the contents of the pasta action station (but those usually involve choices anyway, right?). It was weird enough feeling out of place in general but to be called out for food choices was just unexpected. If there is to be an expo in my future, it will surely be vegan or natural foods (like this). But I would go to the expo all over again to see Christina cook.
Posted by Jen at 8:22 PM 1 comments