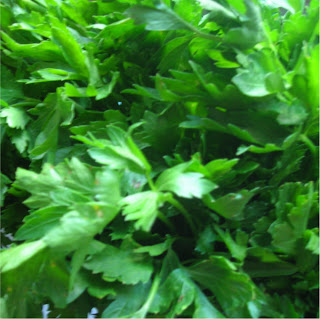 I used to think of parsley as a garnish and I had not developed a liking for it until recently. My friend Emek used to make us fabulous Turkish dishes, many of which had parsley in them. But when replicating her masterpieces I left the parsley out. It tasted too bitter to me. I was a picky eater.

Fast forward years later and to an introduction to macrobiotic cooking. With the right combination, parsley fast became a fantastic and complimentary ingredient in dishes. My palate had readjusted and, dare I say, developed feelings for this leafy green. But when I found a recipe for parsley tea, which only consisted of parsley, I wondered if it could stand on its own.

Parsley has been the main star in juices and other elixirs for various ailments and health benefits. If anything, I thought, drinking parsley tea on occasion would be a good contribution to health. It also turned out to be tasty!
This recipe comes from Simon Brown's Modern-Day Macrobiotics:
Bring 1/4 cup finely chopped parsley and 1 cup water to a boil. Simmer for 10 minutes. Strain and enjoy!

*Note: Parsley and other select leafy greens may not be suitable for people with certain health conditions. See the first link above for more information.
Posted by Jen at 6:15 PM