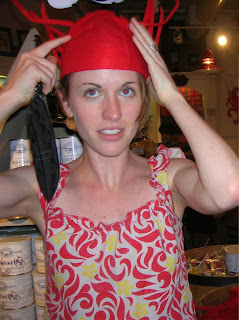 I have a whole new appreciation for the saying "There's no place like home." Especially after being away from a home that houses my juicer and my organic fruits and veggies. For the past week I have been on work assignment in Baltimore. While I usually feel good getting out of the office from time to time a week proved to be too long for me. I found many hurdles to keeping on track with my 50/50 raw and cooked food plan while away from home.

Naturally I started missing my bed after a day. But on day one I was already loathing the ever-present temptation of the chips, cookies, pretzels and legal addictive stimulants laid out at the work and conference events. Everybody was partaking. The coffee was calling my name. My willpower was compromised half way through the first day.

It didn't help that there were few healthy food options in the vicinity. The closest thing to health foods I could find were the Naked juices in a convenient store, the smoothies in the hotel and inner harbor shopping areas and the salads in the hotel restaurant. The "fruit" smoothies came from a box and the salad couldn't have been whiter - iceberg lettuce, baby. I got frustrated. I wanted to scream.

I prepped as much as I could beforehand, packing fresh green juices and raw food snacks from Awesome Foods and storing them in the hotel fridge. But eventually I ran out of them and began eating foods with mayo and cheese - two culprits that are hard to avoid, especially when I am also trying to avoid eggs and other fermented foods. Even the salad had cheese! I removed as much as I could like a crazy picky eater.

A few days later I did start to feel better about food options. I got to visit some friends from grad school who provided home-cooked and uber healthy turkish meals. Thank you, Emek and Mehmet!

Despite beautiful weather in the inner harbor and plans to site see on my last day all I wanted to do was go home. I didn't feel 100% and wanted to get back on track with my food plan. No more temptations, thank you very much. My first orders of business upon return were to rest up and make a trip to Whole Foods. I loaded up on produce and soups. I began to feel normal again. 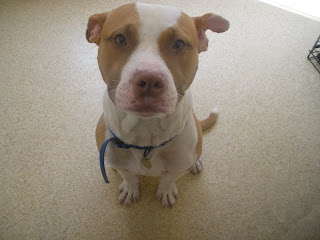 I had been meaning to get back into charity work but with the economic times being what they were I was apprehensive about writing any checks. Then the light bulb went off. Pay it forward in time and attention to a cause. I instantly knew what I wanted to do.

I had been itching to get a dog for the last few months but hadn't really made room for one financially. It didn't help that my current apartment has a 35lb restriction and a $350 non-refundable deposit. Dog friendly? I think not! What's a canine-loving girl to do?

Spend some quality time at PAWS in Old City, of course!

It felt great to share in the mission of this awesome organization, which is a no-kill shelter. In just three years they upped the rescue rate from city shelters from 11% to 60%!

As part of my employer's Day of Service six of my co-workers and I fundraised, advertised, cleaned kittie playrooms and walked adorable and well-behaved pups. I'm definitely going back for more. I left with a sense of ease too. Puppy love is a great stress reliever. 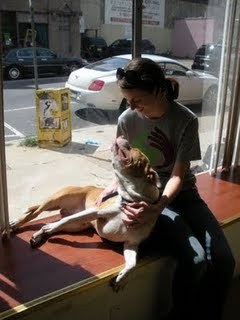 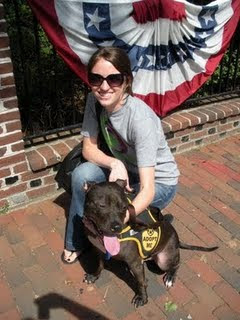 Getting Off on the Right Foot

After a fabulous dinner with Archna at Midtown I got propositioned. My friend Ed asked if I wanted to run....at 9:30 tonight. The weather couldn't have been better. And I dig all things impromptu. The Universe was also sending me a message: "Earth to Jen, this is the week you're supposed to exercise." With my self-tested theory that a person can stick with anything for a week, I did a week without cheese and several weeks sans coffee. Last week I roughed it and included more fiber in my diet. It was time to bite the bullet and put off further procrastination. Darn. Exercise, here I come. Please be nice to me.

I needed some inspiration. Enter Ed. Here's the thing about Ed and running. He can finish a mile in 5 minutes...without any help. It's tremendous. And he's so in love with running. I thought maybe his addiction would rub off on me. It hasn't yet. I'll give it a little more time. Maybe a day or two.

Twenty seconds into our run he started goofing off. I couldn't stop laughing. He didn't hear me. His iTunes was on full blast. He zigged and zagged through the streets and I wondered if I'd make it through all this ridiculous fun. My inner mantra was less than stellar: "You are not cut out for running. You won't make it." But make it I did...a whole mile to Border's with a long break in between...and a mile back. It wasn't pretty. I wanted to hurl. My head throbbed. The ears were aching. Did I mention I wanted to hurl? I guess no exercise in months will do that to a person. Yikes!

I'm nevertheless thankful to my running guru for getting me off my you-know-what and making it burn. We'll see if I fall in love with running. I'll probably just fall. But I'll have a lot of laughs while doing it.
Posted by Jen at 12:01 AM

Email ThisBlogThis!Share to TwitterShare to FacebookShare to Pinterest
Labels: exercise 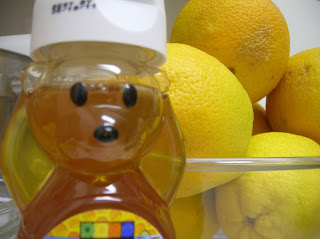 Tonight was date night. With myself. I really needed an evening of doing nothing after work. I asked. I received. That was easy!

I am in a state of bliss after an impromptu spa night.

Email ThisBlogThis!Share to TwitterShare to FacebookShare to Pinterest
Labels: juice

Despite daily temptations I successfully avoided putting cheese in my mouth for 7 days. Hoorah!

I celebrated with....you guessed it. Nirali was in town with her man-friend and I wanted to take them to my favorite pub-food spot. Everything there has cheese. I got a scrumptious sandwich with a little boursin on top. It wasn't too much. It was just the right amount!

The thing is that, during my friends' visit, I also had coffee...with cream. This drinking of addictive stimulant followed a 48 hour headache and many many advil. The small coffee did the trick in an instant! And there was no crashing!

My point: I plan to practice everything in moderation. I will continue to ease up on my incessant homage to fromage. I will continue to drink my Dandy-blend coffee substitute. But I will not beat myself up when I have the occasional cheese slice or cup o joe. Having seen the effects of forgoing them both (less brain fog, less fatigue, no stuffy nose), I feel that I can successfully pick up where I left off and practice some intermittent abstinence.

I subscribe to a wellness list serv and read a post of a woman going cold turkey on meat, coffee, etc...I could relate to her interest in getting healthier ASAP. But I knew from experience that going from one extreme to another overnight wouldn't work. And staying at the extremes is just pure punishment!

When my previous attempts to completely rule out cheese failed time and time again, I set the goal for one week. I did the same with coffee. The cheese strike lasted 7 days and I was coffee free for 27!! Next challenge: exercise. On second thought, I'll put that off for one more week :) This week: Fiber intake. Yum! I've been juicing a lot and reaping the benefits but I need to give my grains and whole fruits/veggies some love and attention. Brown rice, anyone?

The Tastiest Smoothie in the World! 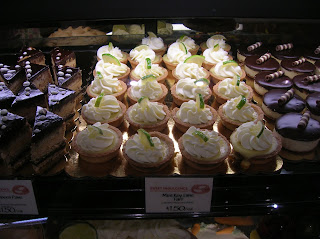 No, I didn't mash up these cute baby key lime pies! But the quest did start with a hankering for them. As I'm avoiding eggs and milk and cream, I was sh** out of luck for a quick fix. Then, the Universe answered my prayers!

I was flipping through some raw "cook" books at Border's last night and randomly came across a key lime smoothie recipe. I had tried a raw and alkalizing recipe for key lime before and it was not working out. I experimented with the ingredients and all I got was chewy avocado cucumbery mess. Blech. The latest recipe is not completely alkalizing but it is raw. And it is mighty tasty! 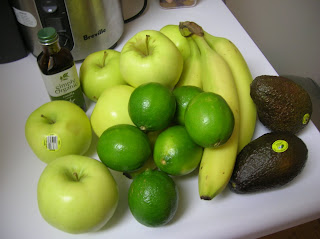 by Sarma Melngailis. Sarma is also partner and executive chef of Pure Food and Wine restaurant in Manhattan. I plan to check it out this month!
Posted by Jen at 5:12 PM

Eye on the Pies Anyone who knows me will tell you that I'm obsessed with the ABC show Pushing Daisies. I actually discovered the forensic fairy tale very late (pun intended) in the game and after it had been cancelled. Thank god for DVD and iTunes!

Of course, if you too were a fan, then you know all about the craze over cup pies ~ those small individual servings of heaven.

I decided to make them vegan and started with this pie crust recipe. After some trial runs with canned fruit, I made some concoctions of my own. It turns out there isn't much variety in the canned food section, even at Whole Foods. And fresh is better anyway, right? Um, yeah!

I started with canned cherry and pumpkin fillings and then moved on to fresh whole peaches. In homage to PD, I made Chuck's pear pies with gruyere. 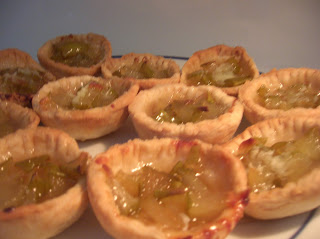 The picture doesn't do them justice!
Next on the list: strawberry pie and mixed berry. Yum!

In a saucepan combine the fruit and sugar; stir for about 10 minutes. Mix the cornstarch and water; add to the saucepan and stir until the filling thickens. Voila!

I like to make openface pies for the visual effect. They are so colorful! I use a mug to make the pie crust circles and simply fold them into the cupcake/muffin tins. From that point you just add the filling and cook on 325 for about 15 minutes.

When making the pear with gruyere, I put grated cheese in before the filling or sometimes just add it on top.

Cup pies are so simple to make and have been a huge hit at parties! 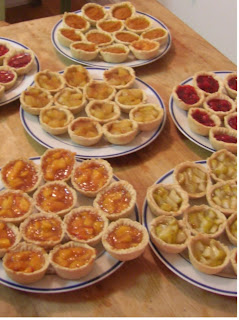 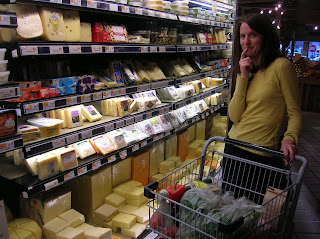 This picture was taken at the end of Day 2 of my "no cheese week" challenge. No worries. I held my ground. I'm into day 3 and the score is Jen: 3 Cheese: a big honking ZERO. Note to those forgoing food triggers: start slowly and with reasonable goals. They're easier to meet.

Now with that said, I almost did buy swiss-pressed decaf coffee. I'm eliminating all coffee for now. My friend Susan snagged the last of a scrumptious smelling blend called Sleepy Hollow. With Halloween right around the corner I went to see if there was a bag with my name on it. Susan, without missing a beat, said, "Don't even think about it." She is now my coffee sponsor too. :)

I actually went to the market to sample cashew cheeze: 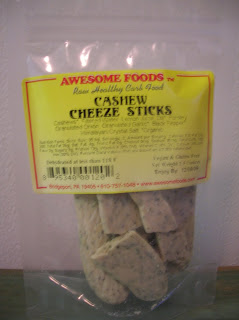 Check out Awesome Foods' website for their cheeze and other fabulous products!