Every Monday I'm trying a new macrobiotic recipe and posting the results at HHJ. I'm looking to incorporate macrobiotics into my dietary plan but am not sure if I'll go 100% with it. I've definitely felt better since adding macro dishes to my plate so we'll see where it leads...

Last Monday I checked out a recipe using burdock root and kept it even simpler this week with blanched vegetables.

Blanching is a great way to enjoy your veggies; this technique keeps them crisp and tender at the same time, providing a perfect balance in texture. I find them easier to digest this way too, although this result will likely vary from person to person.

Take your favorite veggies (I used cauliflower, broccoli, snap peas and carrots) and immerse them in a pot of boiling water. Remove after one minute and transfer them to a bowl of ice water, letting them sit for another minute. Strain and enjoy!

I eat blanched vegetables without a dressing but you can experiment with seasonings or sauces if you need a little something something. Black pepper, olive oil and lemon is a refreshing concoction to add to veggies and salads.

Interested in exploring macrobiotics? Click here for a cliff notes version to get you started
Posted by Jen at 2:04 PM 0 comments 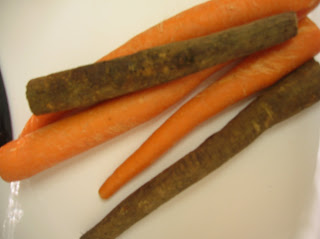 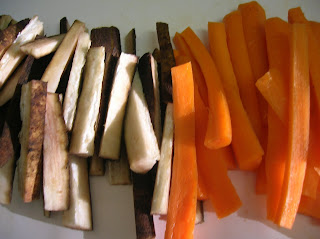 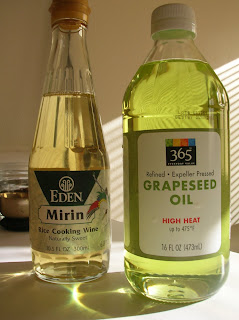 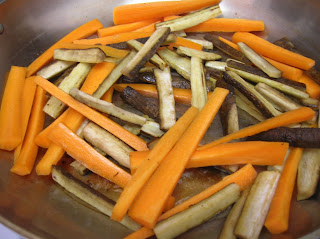 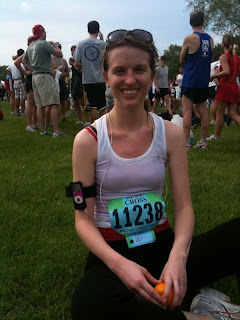 There was hype.
There was heat.
There were open fire hydrants.
And there were two holistic health junkies...
rocking the Broad Street Run.
The running guru and I met up in the wee hours of Sunday morning, as per the advice of the organizers, to make plenty of time for the expected crowd. The Broad Street Run is the largest 10 mile race in the country, consisting of 30,000 runners. Broad Street was also going to be my farthest race, and run for that matter, to date. Yikes!
In the three weeks leading up to BSR I had been majorly slacking with running; my weekly routine consisted of two 2-4 mile runs with a 7-9 mile weekend run. I was counting on adrenaline and the cheers of people who lined the streets to get me to the finish line. Little did Ed and I know that it would be the hottest race day on record since 2001 with humidity and a high of 89 degrees.
The race was very well run (pun-intended), especially in light of the weather. Organizers upped the supply of water and gatorade and opened fire hydrants to spritz runners. Ed got sick and towards the end I felt pretty weak but surprisingly I experienced none of the usual issues during practice runs (cramps, knee problems, etc...). We passed a number of people who needed medical attention; some were less than 1/4 mile from the finish line! Ed and I did cross the finish line...and with decent timing too!
Ed's time - 1:18:12 - placed 1995 out of 26251 runners.
My time - 1:38:17 - placed 11749 out of 26251.

I want to give a big thank you to Ed for being my running guru and helping me meet my goal! And if you're thinking of doing a 10-miler, Broad Street is the race to run! You'll get pumped. You'll want to do it again.
What's next? A half-marathon in Philly, of course! Stay tuned.
Photos courtesy of Ed and Rose, the iPhone. 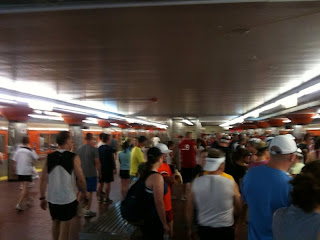 Subway Ride to the Starting Line 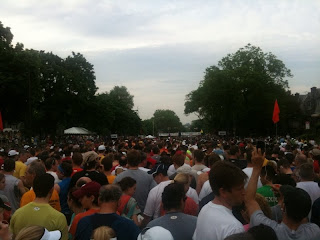 The Crowd at the Starting Line 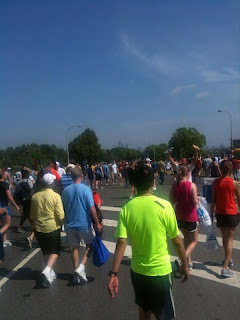 View from the Finish Area - 5 miles from City Hall