Battle in Seattle ~ by Ed 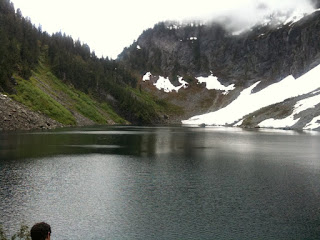 The quest for good food wasn't nearly as serene as this lake.

My sister earned her masters degree in public health last week from the University of Washington, and that called for a celebration. Ten family members and one family friend headed out to Seattle to congratulate her. This was my first week away from home since I had dropped meat and many dairy products. Traditionally, vacations have meant a license to eat junk food and lots of meat. I was determined to be healthier this time around, going so far as to pack a blender; but as anyone who travels knows, it is not easy eating green in a new city. This was going to be a fight against old habits amongst carnivorous relatives who have a voracious appetite for meat.

The trip didn't start out well with a long flight out West. Airport "food" just flat out sucks, moreso if you are vegetarian. Not even the salads are appealing. I grabbed a pretzel from Auntie Anne's, hoping against hope that I could get something better during a layover in San Francisco. But my flight left late and I ended up spending the night at the airport with all the eateries closed. The best I could do the next morning was to get some crackers and water from a convenience store for the flight to Seattle. After my arrival and a long nap, my sister took us to a gourmet pizza place in the city, which was tasty, but decidedly unhealthy. For dinner at a seafood restaurant, I had a salmon burger (I still dabble in fish), which I couldn't finish since I was falling asleep at the dinner table. So travel and Day 1 in Seattle seemed to be a complete bust.

After taking a long run the next morning, I felt completely regenerated. For lunch, I resisted junk food urges and picked up a quinoa salad instead, which was a little too salty but good. My sister's graduation was that night, and mercifully, it was catered with plenty of vegetarian food. I enjoyed rice wraps, salad, and Greek spinach quiche. Unfortunately, I continued the cheese-eating the next day at lunch (and drank too much beer) on a boat ride in Puget Sound. Dinner was better that night, as we were treated to Salmon with diced tomatoes and onions and asparagus. 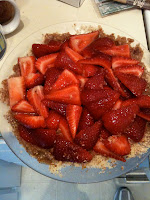 The next day was by far the healthiest eating wise. I put the blender to good use and tried the excellent recipe for Sweet Strawberry Pie that Jen recently blogged about. I had trouble with the crust, but it was an overall success. My cousins loved it and even my Allegedly Healthy Aunt, who is in many ways healthy but doesn't believe that meat and dairy could be bad for one's health, couldn't believe raw pie could taste so good.

One of the highlights of the trip occurred that evening, as I took my sister out for a meal at Cafe Flora, an award-winning vegetarian restaurant in Seattle. The design alone was amazing, as we were seated next to a fountain in an atrium. The menu featured all vegetarian options, many of which were also available vegan. I opted to enjoy some of my sister's avocado salad as an appetizer and selected the portobello wellington, the house specialty, served with outstanding mashed potatoes and asparagus. The mushrooms were cooked to taste as though it were meat. It was incredible and I highly recommend the restaurant should you ever find yourself in Seattle.

The next few days were not as good on the food front. My aunt took the cousins to a Seattle fast food joint appropriately called Dick's. When I was asked what I would be getting, I replied without thinking, "I don't know, I can't bleeping eat anything here." Alas, my pleas for them to give up meat had fallen on deaf ears. I did get a laugh when a cyclist shouted out, "Eating at Dick's is like putting poison in your body" while they were eating their meat. I went home and packed some fruit and a pb&j sandwich for a hike scheduled the following day. Too tired to make anything as my sister went out, I had some more strawberry pie for dinner. On the flight home, I had a couple of protein bars since, again, there was nothing but poor food options at the airport.

Overall, I was pleased with how I ate on the trip. If I had to do it again, I would have packed better food for the flights and worked harder to make food at my sister's place. However, things could have been a lot worse. I'm happy to say the meatless challenge is still going strong for me. I was less successful in convincing relatives to drop meat and dairy. One cousin even remarked that if milk is so bad, why do the sell it in schools? Good question. But that's a story for another time...

If you are traveling, be sure to consult the Eating Well Guide for local organic goods and VegGuide for vegetarian and vegan cuisine. Happy Eats!
Posted by Ed at 8:40 PM