In the Raw, Part II 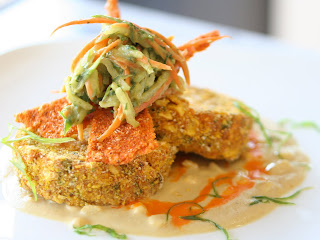 Here is the second part of my interview with the Live Food Chef. In part I we discussed how he got interested in raw foods and what led him to pursue it not only as a way of life but as a career as well. Here he explains the benefits of a raw foods diet and his experience at the 105 Degrees Academy.
How do you feel on a a raw foods food plan in comparison to other ways you've eaten? Any noticeable changes? How long have you been going raw?

Until now, I hadn't really ever eaten according to any specific meal plan, so naturally eating raw has been very different for me. Given the history of my past food consumption, I can say that I do feel much better about the criteria that I have designed for determining what I will or will not eat. It feels good to be able to have some guidelines in place so that it makes my choices easier too. Its sort of a form of elimination. I can say that when it comes to decisions that one is forced to make on a daily basis, i.e. what foods to consume, I am glad that I am no longer overburdened by an unnecessary pad load of choices (most of them completely unappealing anyway). There is a certain sense of elitism associated with the choice as well. Not necessarily a feeling of supremacy towards others, but a liberation from bombardment by products. I feel that I've gained an attitude that claims myself too good to contaminate my system with corn syrup-laden and chemically conglomorated food stuffs.

From a physicality standpoint, the changes that I've noticed in regards to heightened energy and general mental sharpness have been affable as well. Eating nutrient dense foods as opposed to just dense foods seems to free up some of the energy that the body was using for digestion and processing. Its an interesting concept and one that has eluded me until recently; you don't have to be and probably shouldn't be tired after you eat! Food should be used as a source of energy, not just as a source of sustenance. 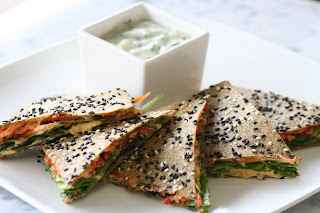 How was your experience in Oklahoma with the raw foods culinary program? Could you describe a typical day in the program?

The raw foods program that I enrolled in was the Fundamentals of Living Cuisine Certification program at the 105 degrees academy in Oklahoma City. It was a wonderful learning opportunity for me. The program is designed and modeled after other classic culinary arts programs and intended for individuals seeking the opportunity to learn from experienced raw food chefs in a real kitchen environment. As it is designed for the aspiring culinary professional, class days were full and typically ran from 9am-3pm. Each day included a mix of lecture and hands-on learning.

A typical day in the program included demonstrations by the instructor and subsequent execution by the students. There was often opportunity for the students to experiment with flavors and develop their own ideas for implementation into their recipes. Most days we would prepare one dish in the morning so that we could eat what we made for lunch (sometimes great, but often times enlighteningly distasteful). Often times we would sit down for lunch in the cafe so that if your efforts for that day were less than palatable, you could order from the restaurants menu which was always good. We would prepare another dish in the afternoon so that we would have something to take home for dinner. The program was designed to first teach basic skills and then culminate with each student planning and presenting a three course meal of their own. Knife skills, recipe-building, and presentation were all emphasized throughout the curriculum.

What is your favorite recipe?

I really like kale salad as it is a go-to meal for me and something that I feel is easy to prepare and extremely delicious too.

Serves 2-4 people as a main dish

Pull the leaves of the kale from the ribs and shred it finely with chef's knife. Place chopped kale in a large mixing bowl and sprinkle with salt and pepper. Add olive oil and lemon juice and massage into kale with your hands (important to use hands to integrate ingredients into greens - salt will open pores of the greens and allow flavors to penetrate). Massage thoroughly until kale has wilted. Set aside.

Blend all ingredients in blender until smooth and transfer to bowl. Incorporate into salad and mix well. I often like to add some sesame sticks for crunch and other vegetables such as carrot sticks or julienned peppers or snowpea shoots for color and contrast.

For more information about Greg's journey and his raw foods business, check out his website, The Live Food Chef.
Posted by Jen at 2:27 PM