In the Raw, Part I 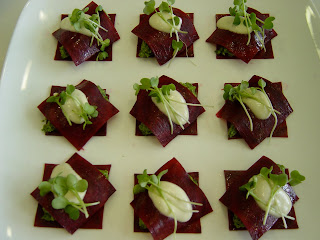 Not too long ago I got to catch up with my friend Greg, a.k.a. the Live Food Chef. He recently got back from 105 Degrees Academy, a raw food culinary school based in Oklahoma, and I wanted to learn what piqued his interest in this program and how he got on the road to raw. Here's part one of my interview with him.

When did your interest in raw food begin? What prompted you to explore and pursue it?

I feel that it is difficult to distinguish when exactly the raw food journey began, because in some ways, it feels like a culmination or a final destination that I have unconsciously been seeking since the time that I began to prepare my own meals. More accurately and less ambiguously though, I guess that I first started to explore raw food last year in the fall. Previously, I had always found employment as a line cook in traditional restaurant kitchens. I put in alot of time on the various stations in the kitchen, favoring to work on the saute side. I really enjoyed having all of my burners fired up and heating my pans to the perfect temperature. I honed some real skills over the heat and enjoyed being succesful at feeding large numbers of customers on a busy Saturday night. I liked the science behind it and the relationships that developed with the other cooks. It felt good, but ultimately, I couldn't see the future in it.

My discontent with that type of work was always somewhat apparent and I felt that I needed to get out of the kitchen heat and try a different path. I worked for the summer as an archaeologist until the work ran out and I was forced to make a decision regarding which direction I would go next. After some introspective time, I concluded that perhaps my discontent in the kitchen did not stem directly from the fact that I didn't enjoy preparing food. In fact, quite the opposite was true. I spent alot of my free time in my own kitchen preparing meals working with different flavors. I knew I could feel fulfilled by creating beautiful and delicious meals for others; I was discontented simply because of the stresses that I thought to be inherent in a kitchen environment (i.e. heat , grease , noisy equipment , shouting chefs).

I had been eating more conciously for a couple of years previously. I tried vegetarinism for a couple months (not fully committed), but was more focused on organic and local foods. All the while I was becoming increasingly aware of the dark side of where most food in this country was coming from and how it was being produced. (I think that Eating Animals by Jonathan Safran Foer may have been the last book that I read before going 100% vegan). I realized that the path commercially-produced and processed food takes to get to the plate prohibits it from being truly nourishing, even if it is prepared with love. I wanted to be a part of the good food movement. I began to think that if I found the right kitchen that was making the food I wanted to make, then I could be happy. I began to search for opportunities. Through my research, I found some restaurants that were on the page that I was looking to be on. 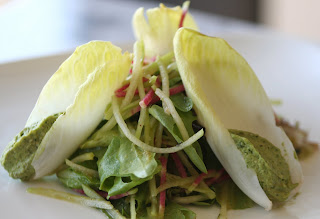 What had your eating habits been prior and how did they evolve to a raw diet?

Prior to raw foods I had been raised, like a majority of individuals in this country, on a traditional american diet. It's funny to think back on the comfort foods of my childhood and wonder how in the world my food choice evolved to where it is today. To name a few, egg on toast (cut into squares), fish sticks (Mrs. Paul's of course), grilled cheese (with velveeta orange only, please), macaroni and cheese (kraft powdered packet), hotdogs, bacon (four or five pieces microwaved was a typical breakfast before going to school), chicken nuggets, cheeseburgers, Ellios pizza, and bagel bites (the only thing I ate in 1996), were among my favorites. Needless to say, vegetables had less than a starring role in any of my go-to meals.

As I grew older and began to cook for myself, I frequently made chicken in various applications (entirely unaware of how screwed the poultry industry was and is) . . . taco taco, burrito burrito, quesadilla, cheesesteak. When I went to college, I took a job as a dish washer in a classical French restaurant. This opportunity opened my eyes to a whole new world of food and flavors that set me on a path of culinary experimentation that was only in its infancy.

The more restaurants that I worked in, the more the range of dishes that I could make greatly widened. I loved food and the opportunity it created for me to showcase my ability. I would eat anything without much regard for how it got to me. The only criteria that I established for the food that I created and ate was taste. It was always easy to eat the food that I was working around all day and night and my diet subsquently changed with the restaurants that employed me. A sampling, with nothing off limits: cassoulet, calimari, cappicola, corn beef , cubans, club sandwiches and eggs, potatoes, and bacon slathered in ketchup on a plain white toasted English muffin with white square celophaned cheese packets for a Sunday morning brunch service on the saute station.

Pizzas were always easy when tending the wood burning oven; oysters too and clams, both top and little neck (perhaps my first experience with eating raw food regularly). Prosciutto-wrapped shrimp horseradish mayonaise, barbeque pulled pork carolina style either north or south, vinegar or mustard. I guess that truely anything that I could wrap up in a tortilla and seal with pepperjack cheese became the normal choice while running ragged back and forth between walk-in coolers.

With all of that being said, I suppose that out of that mindset and mentality of considering taste as effective criteria for food choice, my bend towards "real food" naturally illicited itself forth out of the mess of convenient garbage. I can accurately say that my diet has currently become completely consistant of whole, un-commercially-processed plant-based foods...not always raw, but usually so. A sampling of my current cravings in consideration of the staples primarily include kale salad (in various styles usually containing miso), green smoothies (also forever variable but usually with homemade almond or other nut milk), sprouted buckwheat granola (also contained within a flavored nut milk matrix), anything fresh from Cali's garden ... cucumber, onion, potato, mellon, swiss chard, pepper, and tomatoes in any variety (purple cherokee and green zebra are best), and coconut ice cream (any flavor).

Stay tuned for In the Raw, Part II where Greg shares his experience at the 105 Degrees Academy and a raw recipe!
Posted by Jen at 2:10 PM