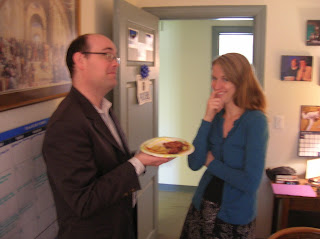 About a week ago my boss and I ended up talking about food, particularly meat. I can't remember how this discussion started. Maybe he saw The China Study on my desk or asked about the green smoothie I had been chugging throughout the day. I proceeded to tell him about the meatless challenge I was doing, which subsequently prompted the question, "why are you doing a meatless challenge?" My response? As diet directly effects one's health, I was forgoing meat for 46 days to see if there were any noticable changes in my own health (my friend who was also doing the challenge picked a goal of 46 days as related to the time frame of his Lenten practice). The challenge was also serving as a test-run towards my commitment to a whole-foods plant-based diet.

A die-hard omnivore, my boss debated with me on the subject and we exchanged our opinions in response to the following questions: Is it healthy to eat meat? Are our bodies naturally designed to consume and digest meat? Are there populations that fare well on a meat-eating diet (ie the Inuits)? Neither of us convinced the other. I planned to continue on without meat and he was going to bring on the bacon.

In an effort to challenge me further and see if I'd cave, my boss said he'd bring some bacon to work on my second-to-last day of the no-meat trial. It was one thing to face challenges in finding vegan dishes at restaurants or in making time on a daily basis to prepare homemade vegan cuisine but it was another thing to have someone put meat in front of me. I was nonetheless optimistic and said, "add some cheese to it too! Let's see what happens." 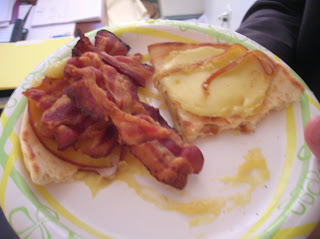 The temptation: bacon and gouda on grilled pita.

While I have blogged in the past about my love affair with bacon, it only took one look at its "nutritional" profile to conclude that it would have no place on my plate. I won't deny that I find it to be delicious but I personally feel that, other important reasons aside, the sodium content alone was worth steering clear of it. And while we're on the subject of flirting with old flames, I was confident I would reject the gouda too. Surprisingly, I don't crave cheese anymore! It took several months to get to the point. Do I still wish I could have it from time to time? Certainly. But my body's response to it reinforces the importance of keeping it out of my diet. Research in The China Study, which documents the relationship between milk proteins and cancer, further encourages me in keeping this goal.

So did I succumb to the last temptation? Did I wreck my 46 day goal? 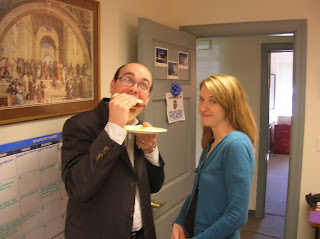 Nope! I was a gouda girl.

Ha! The pictures are awesome. Especially where Greg is taking a bite.