Kicking the Habit ~ by Ed

First off, I'd like to thank Jen for giving me the forum to share my story. I'm a man of few vices. I don't drink much, don't smoke, etc.... Well, there was one drug I was addicted to, but fortunately, I've recently beaten my addiction to caffeine.
A little background is needed to demonstrate how bad the problem was. I'd been drinking soda for most of my life. Bless my parents, but they did not have any problem letting us drink it. Coke was a staple at any family gathering, readily available to any child who wanted it. Through no fault of their own, my parents weren't able to make dinner many nights, so we often had Happy Meals, complete with a small Coke. Later on, my father kept his refrigerator stocked with root beer or Dr. Pepper.
Dr. Pepper was my go to drink whenever I felt the need for caffeine. I was fond of this lame line when drinking it: "I'm sick and the only one who can write me a prescription is Dr. Pepper." Before I successfully gave up caffeine, I would drink as many as 60 oz. of soda a day. At the minimum, I was drinking 40 on a consistent basis. One 20 oz. soda at 9:30 a.m. would get me through the morning and another at 11:30 would get me through the afternoon. Occasionally, I would get a full liter bottle. By occasionally, I mean three or four times a week. Even after long runs, I would have a soda to "replenish" my body.
Enter Jen. Or Jen's blog post about caffeine to be more specific "Crash and Burn (Then Get Back Up)." I knew soda was bad for me. Who doesn't? I'd been blessed with great metabolism so all the bad calories I was putting in my body weren't showing up. It allowed me to brush off my addiction. Seeing how good it made Jen feel to go without caffeine filled me with a new resolve. After reading that blog posting I went to my car and poured the bottle of soda I'd been saving on the ground. It was just the symbolic, cliched gesture that I needed to finally get soda out of my life. I only put water in that Dr. Pepper bottle now.
Since reading Jen's post, I haven't had a sip of soda, the longest I've ever gone without it (3 months and counting). I don't plan on going back, either. To fully kick the habit, I needed to replace the soda with something else. Water did the trick for the fluids, but I still needed a boost to get through the mornings. My soda habit was costing around $15 a week. With that money freed up, I began to invest in more fruit and vegetables, packing carrots, grapes, a banana and apple every day. I no longer got tired shortly after arriving at work and I generally felt better throughout the day now. I even eat less junk food since I'm not going to Wawa as much or stopping by the cafe at work. I even lost seven pounds after cutting out soda, as my workouts have gotten more effective.
Since cutting out soda, I've seen two documentaries that made me even happier to have given it up. Both Food, Inc. and King Corn touch briefly on how awful consuming it can be. In the former, an impovershed family laments how cheap soda can be while fruit and vegetables cost more. They realize it's making them unhealthy but their meager budget only allows them to buy so much and soda can be filling. In the latter, a formerly obese man in NYC shows a picture revealing how much he used to weigh. He attributed a loss of one hundred pounds just to giving up a certain soft drink.
Governor David Paterson (D-NY) was ridiculed for proposing a tax on soda last December, and the plan was met with much opposition. It never panned out and his low approval ratings made it even unlikelier to pass. President Obama toyed with the idea recently but nothing's come of it. It's hard to understand why this wouldn't be an easy sell. Making soda more expensive is not a silver bullet to solving the obesity crisis facing this country, but it could go a long way towards helping the problem. Politicians have no problems with sin taxes on cigarettes or alcohol, but we're not there yet with carbonated beverages. It's not even banned from all schools yet, which should be a given. Los Angeles backed off a soda ban in schools due to economic pressure just last month (check out the ignorant quote from Mr. Finch). Americans already consume more soda than any other country so weaning people off of it and giving them incentive to think healthier could reap untold benefits beyond one's health. Selling fewer plastic bottles could help the environment in addition to our diets.
After the first week without caffeine, it was easy to kick my soda habit. I crave it a bit every now and then, but I don't plan on buying any. It looks like I'll be giving something else up for Lent next month. If anyone else out there has a similar problem with their vice, take heart. If I can kick my habit after drinking upwards of 200 ounces of soda a week, anything is possible. The only prescription this doctor fills now is for H2O! 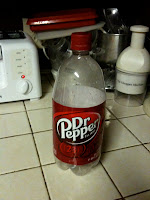 Great post, Ed! Way to go kicking that habit--I know how tough it can be. (I have quit Diet Coke many times, but this last stint seems to be sticking, hurrah hurrah.) Thanks for sharing your story.